Come to Trentino and discover this fantastic city 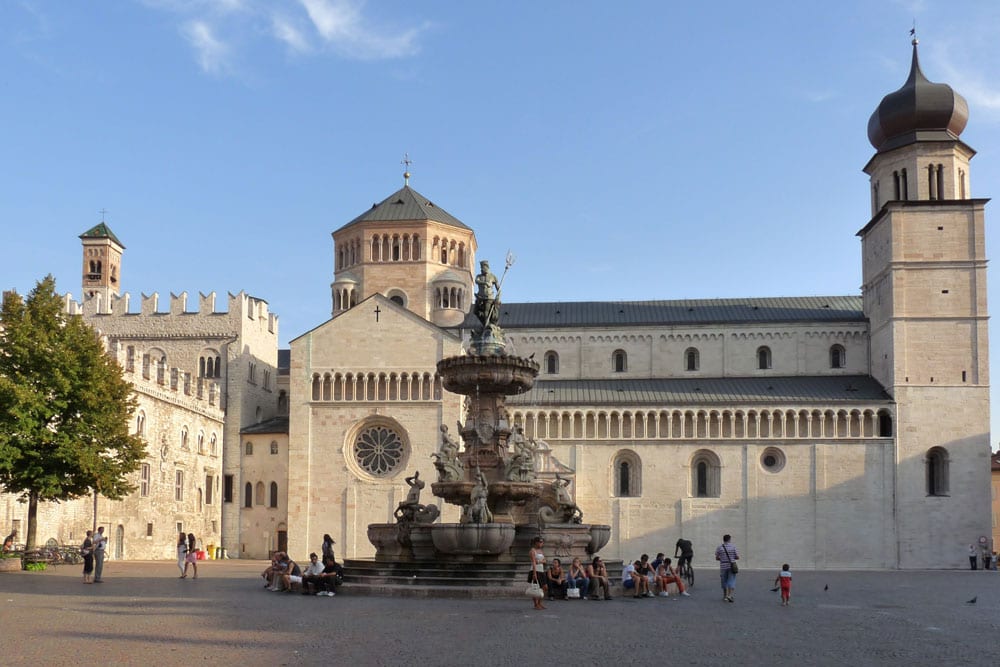 Born on the banks of the river Adige and set between the Paganella and the Calisio, Marzola, Vigolana and Bondone mountains, Trento is the city of the homonymous Italian Province with ancient historical origins.

Founded as a Rhaetian settlement, the city of Trento saw on its soil pass different dominations (including the Roman one) until it became the seat of the Prince Bishop of Trento and, later, part of the Austro-Hungarian Kingdom until annexation in the Kingdom Italy.

The rich historical past of the city is still present in it and influences its present appearance, but Trento is much more. University city, Trento is also rich in culture, entertainment and places of interest and it is necessary to visit it at least once during a holiday in Trentino.

There are so many things to do in Trento, and on this page we will try to give you a general perspective.

As we said at the beginning of the article, Trento is a city rich in history, consequently offers a huge variety of artistic and cultural places to visit.

It is therefore worth visiting Trento and enjoying all the architectural and artistic works present in it.Here are some suggestions on what you can see in Trento.

Trento is a city rich in churches from different historical periods and architectural styles. It is worth visiting the Churches of Trento and admiring their beauty, primarily the Cathedral of Trento (the Cathedral of San Vigilio) and the church of Santa Maria Maggiore.

In Trento there are many historical buildings. Although not all are accessible to the public, it is worth visiting them. Among these you can not miss the Palazzo delle Albere (now home to Trento of the famous MART museum in Rovereto), Palazzo Pretorio (home of the Tridentine diocesan museum).

But even simply walking through Trento can turn into a cultural visit. The city is in fact full of fountains, statues, monuments and other artistic installations that deserve to be visited and admired during a walk.

A stop at the Fountain of Neptune in Piazza del Duomo, Torre Vanga, the Torre Civica, its medieval walls, its fortifications, and its archaeological remains and the monument to Dante Alighieri is a must for a visit to Trento.

Another must is the Castello Del Buonconsiglio, home to the Bishops for centuries, where you can visit the series of frescoes, the cycle of the months and other things.

Trento is not, of course, only art and culture, but also fun and relaxation.

Pubs, discos and other entertainments await you both day and night. The possibilities for recreation in Trento will not be lacking, whether you want to enjoy the latest film released at the cinema or give you shopping.

Trento is a city rich in social events. Among these events can not be mentioned the fairs that, throughout the year, take place in the capital of Trentino.

There are also fixed appointments in Trento which can not be missed. These events and festivals are also investing all year round, including the Trento Film Festival (dedicated to the mountains), the Festival of Economics (an event focused on the economic world) and the Vigiliane Feasts (a week of festivities in honor of San Vigilio, patron of the city).

But among all these manifestations, the undisputed king is surely …

The Christmas Market of Trento

The Trento Christmas Market is part of a dense agenda of events designed by the city of Trento to celebrate Christmas.

“Trento, the city of Christmas” is an event capable of making this time of year special, thanks to a series of initiatives based on songs, animations and entertainment, but in this joyous setting, the Christmas Market is the main attraction.

The stands of the market talk about Christmas thanks to their perfumes, their flavors and their objects. It is practically impossible not to get involved and not to be transported in the Christmas atmosphere thanks to this magnificent city event that will accompany tourists and citizens towards Christmas, the New Year and the Epiphany. The Christmas Market of Trento, in fact, starting in late November and ending at the sixth of January, becomes the perfect companion of all Christmas holidays.